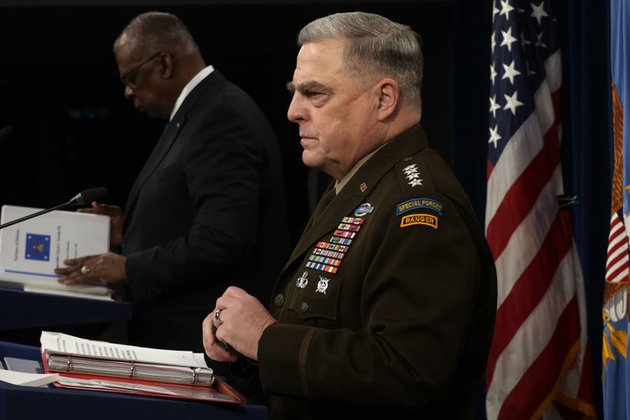 US general says Ukraine invasion would be horrific

Citing reports of the weaponry Russia has allegedly amassed on the Ukrainian border, Joint Chiefs of Staff chair General Mark Milley argued that if an invasion happens, it would "result in a significant amount of casualties."

"Given the type of forces that are arrayed, the ground maneuver forces, the artillery, the ballistic missiles, the air forces, all of it packaged together. If that was unleashed on Ukraine, it would be significant, very significant," Milley said at a Pentagon news conference on Friday.

Backing up Milley's nightmare vision was Pentagon chief Lloyd Austin, who declared that while Russian President Vladimir Putin had not set his heart on invading yet, he was capable of doing so, and there were "multiple options available," such as "the seizure of cities and significant territories" by Moscow.

While Austin told reporters on Friday that President Joe Biden was not planning to deploy US troops to Ukraine for combat operations, he noted that all other options were "on the table." Later that day, Biden revealed that American troops would be sent to Eastern Europe "in the near term." Some 8,500 US troops had been put on "heightened alert" with a view to their possible deployment to Eastern Europe earlier this week.

Ukrainian President Volodymyr Zelensky, meanwhile, has asked the US to tone down rhetoric that paints a picture of a near-certain invasion of Ukraine by Russia, even as Moscow insists it has no plans to attack its neighbor. Speaking to foreign journalists on Friday, Zelensky stated that "we are not seeing any greater escalation than it has been before."

"From media coverage, it looks like we are at war already," the Ukrainian president added, noting that "we don't need this panic."