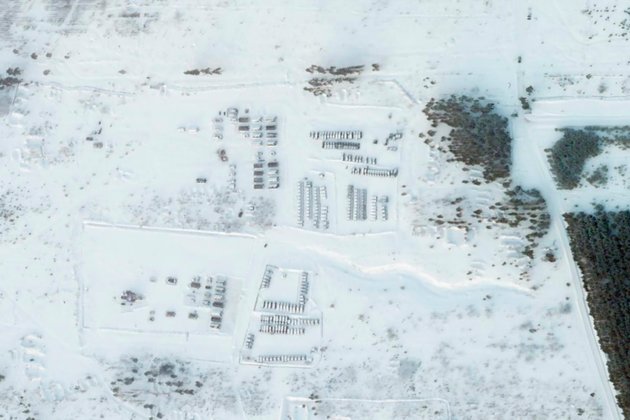 US Tries to Name and Shame Russian Disinformation on Ukraine

WASHINGTON - In a break from the past, the U.S. and its allies are increasingly revealing their intelligence findings as they confront Russian preparations for invading Ukraine, looking to undercut Russian President Vladimir Putin's plans by exposing them and deflecting his efforts to shape world opinion.

The White House in recent weeks publicized what it said was a developing Russian 'false-flag' operation to create pretext for an invasion. Britain named specific Ukrainians it accused of having ties to Russian intelligence officers plotting to overthrow President Volodymyr Zelenskyy. The U.S. also released a map of Russian military positions and detailed how officials believe Russia will try to attack Ukraine with as many as 175,000 troops.

Experts credit the White House for declassifying intelligence and moving to rebut false claims before they're made - a so-called 'prebuttal' that undercuts their effectiveness better than an after-the-fact explanation.

China Eyes Risks and Rewards of US-Russia Standoff Over Ukraine

But the release of information isn't without risks. Intelligence assessments carry varying degrees of certainty, and beyond offering photos of troop movements, the U.S. and its allies have provided little other proof. Moscow has dismissed Washington's claims as hysteria and invoked past American intelligence failures, including false information put forward about Iraq's weapons programs.

There are no clear signs of change so far from Russia, which continues to move forces toward Ukraine and into Belarus, an ally to Ukraine's north. There is growing pessimism in Washington and London about ongoing diplomatic efforts and a belief that Putin will likely mount some sort of invasion in the next several weeks.

Russia is known for using disinformation as a tactic to sow confusion and discord as part of its overall conflict strategy. When Russia invaded Ukraine's Crimean Peninsula in 2014, it mounted a campaign to sway ethnic Russian residents of the territory. State media and social media accounts linked to Russia promoted allegations that the West was manipulating protests in Kyiv and false or unconfirmed tales of lurid crimes committed by Ukrainian forces.

Ukraine: What We Know

This time, the U.S. says, Russia is trying to portray Ukrainian leaders as aggressors and to persuade its own citizens to support military action. At the same time, the U.S. and its allies allege, Russia has positioned operatives in eastern Ukraine who could use explosives to carry out acts of sabotage against Russia's own proxy forces and then blame Kyiv.

The White House has repeatedly highlighted what it sees as disinformation and is privately sharing additional intelligence with allies including Ukraine. The State Department recently published a fact sheet listing and rejecting several Russian claims. And the Treasury Department sanctioned four men accused of ties to influence operations intended to set the pretext in Ukraine for a new invasion.

White House press secretary Jen Psaki described a 'strategic decision to call out disinformation when we see it.'

'We are much more cognizant of the Russian disinformation machine than we were in 2014,' she said Wednesday, adding, 'We need to be very clear with the global community and the U.S. public what they're trying to do and why.'

Moscow continues to make demands that NATO not accept Ukraine or further expand to any other countries. And after British intelligence accused him of being a possible Russia-backed candidate for president, Ukrainian politician Yevheniy Murayev denied the claim and told the AP that it 'looks ridiculous and funny.'

Meanwhile, Washington and Moscow go back and forth online. Kremlin-backed RT.com on Dec. 21 posted a video alleging 'US private military companies are amassing CHEMICAL COMPONENTS in Eastern Ukraine.' The State Department rejected that claim in its fact sheet on Russian propaganda. Russia's Foreign Ministry then responded with tweets 'debunking @StateDept 'facts' on Russian disinformation on Ukraine.'

Washington's efforts have raised questions in Kyiv, where Ukrainian President Volodymyr Zelenskyy has taken a different public approach of trying to tamp down public fears of an expanded war even as many Ukrainians prepare for possible combat.

Ukrainian officials privately question why the Biden administration is warning about an impending invasion but not imposing preemptive sanctions or taking action against the Nord Stream 2 gas pipeline, which has been criticized for giving Moscow more leverage over Ukraine and Western Europe. The Biden administration lobbied Democrats in Congress to oppose a Republican-sponsored bill that would have required the imposition of sanctions against the pipeline, which has not yet gone into operation.

The White House has threatened tough sanctions if Russia does invade and is preparing to move forces to NATO's eastern flank in the event of an invasion. The U.S. and Western allies are also sending weapons and missile systems to Ukraine.

Molly McKew, a writer and lecturer on Russian influence, said the administration's moves to counter Russia's influence efforts needed to be accompanied by a clearer statement of American goals and plans to repel any invasion.

Publicly identifying Russia's actions alone will not stop Russia from carrying them out, said McKew, a former adviser to President Mikhail Saakashvili of Georgia, which fought a war in 2008 with Russia and still is trying to regain control of separatist regions backed by Moscow.

'They're trying to apply disinformation thinking to military domains,' she said. 'You absolutely cannot expose away the crisis.'

In both the U.S. and Ukraine, experts say, there is far more societal awareness now of state-sponsored disinformation. Russia in the past several years has continued to bombard Ukrainians with text messages and false stories during the ongoing war in eastern Ukraine in which at least 14,000 people have died. And Russia's interference in the 2016 U.S. presidential election led to several investigations and years of often fractious debates.

Bret Schafer, senior fellow at the German Marshall Fund's Alliance for Securing Democracy, said that while there are risks to elevating false claims in the process of debunking them, 'there is a need to head off information threats as opposed to responding to them after they've been let out into the wild.'

But publicly accusing Russia of misbehavior is ultimately a limited deterrent. 'They don't care about reputational damage,' he said.