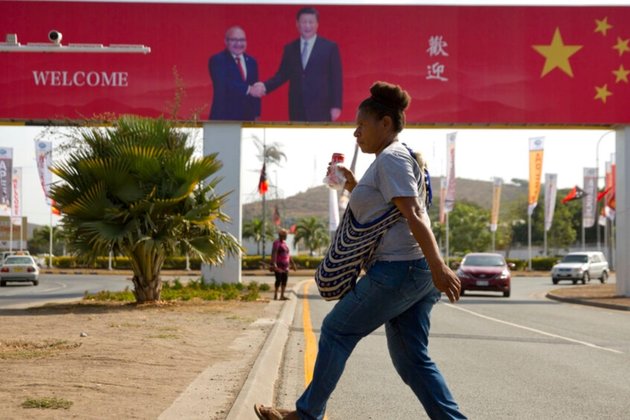 WELLINGTON, New Zealand - China wants 10 small Pacific nations to endorse a sweeping agreement covering everything from security to fisheries in what one leader warns is a 'game-changing' bid by Beijing to wrest control of the region.

A draft of the agreement obtained by The Associated Press shows that China wants to train Pacific police officers, team up on 'traditional and nontraditional security' and expand law enforcement cooperation.

China also wants to jointly develop a marine plan for fisheries - which would include the Pacific's lucrative tuna catch - increase cooperation on running the region's internet networks and set up cultural Confucius Institutes and classrooms. China also mentions the possibility of setting up a free-trade area with the Pacific nations.

China's move comes as Foreign Minister Wang Yi and a 20-strong delegation begin a visit to the region this week.

In Washington, U.S. State Department spokesman Ned Price expressed concern Wednesday about China's intentions, saying Beijing might use the proposed accords to take advantage of the islands and destabilize the region.

'We are concerned that these reported agreements may be negotiated in a rushed, nontransparent process,' Price told reporters. He warned that China 'has a pattern of offering shadowy, vague deals with little transparency or regional consultation in areas related to fishing, related to resource management, development, development assistance and more recently even security practices.'

Price added that agreements that include sending Chinese security officials to the nations 'could only seek to fuel regional international tensions and increase concerns over Beijing's expansion of its internal security apparatus to the Pacific.'

Wang is also holding virtual meetings with the other three potential signatories - the Cook Islands, Niue and the Federated States of Micronesia. He is hoping the countries will endorse the pre-written agreement as part of a joint communique after a scheduled May 30 meeting in Fiji he is holding with the foreign ministers from each of the 10 countries.

Micronesia's president, David Panuelo, has told leaders of the other Pacific nations his nation won't endorse the plan, warning it would needlessly heighten geopolitical tensions and threaten regional stability, according to a letter from Panuelo obtained by the AP.

Among other concerns, Panuelo said, the agreement opens the door for China to own and control the region's fisheries and communications infrastructure. He said China could intercept emails and listen in on phone calls.

Panuelo called the Common Development Vision 'the single most game-changing proposed agreement in the Pacific in any of our lifetimes' and said it 'threatens to bring a new Cold War era at best, and a World War at worst.'

Panuelo declined to comment on the letter or the proposed agreement.

'But I don't agree at all with the argument that cooperation between China and the South Pacific island countries will trigger a new Cold War,' he said.

Like some other countries in the Pacific, Micronesia is finding itself increasingly caught between the competing interests of Washington and Beijing.

Micronesia has close ties to the U.S. through a Compact of Free Association. But it also has what Panuelo describes in his letter as a 'Great Friendship' with China that he hopes will continue despite his opposition to the agreement.

The security aspects of the agreement will be particularly troubling to many in the region and beyond, especially after China signed a separate security pact with the Solomon Islands last month.

That pact has raised fears that China could send troops to the island nation or even establish a military base there, not far from Australia. The Solomon Islands and China say there are no plans for a base.

The May 30 meeting will be the second between Wang and the Pacific islands' foreign ministers; they held a virtual meeting last October.

Those who follow China's role in the Pacific will be scrutinizing the wording of the draft agreement.

Among its provisions: 'China will hold intermediate- and high-level police training for Pacific Island countries.'

The agreement would also see the nations 'expand exchanges between governments, legislatures and political parties.'

The draft agreement also stipulates that the Pacific countries 'firmly abide' by the one-China principle, under which Taiwan, a self-ruled island democracy, is considered by Beijing to be part of China. It would also uphold the 'noninterference' principle that China often cites as a deterrent to other nations speaking out about its human rights record.

The agreement says that China and the Pacific countries would jointly formulate a marine spatial plan 'to optimize the layout of the marine economy, and develop and utilize marine resources rationally, so as to promote a sustainable development of blue economy.'

The AP has also obtained a draft of a five-year action plan that's intended to sit alongside the Common Development Vision, which outlines a number of immediate incentives that China is offering to the Pacific nations.

In the action plan, China says it will fully implement 2,500 government scholarships through 2025.

'In 2022, China will hold the first training program for young diplomats from Pacific Island countries, depending on the pandemic situation,' the draft plan states, adding that China will also hold seminars on governance and planning for the Pacific nations.

In the draft action plan, China says it will build criminal investigation laboratories as needed by the Pacific nations that can be used for fingerprint testing, forensic autopsies and electronic forensics.

China also says it will also spend an additional $2 million and send 200 medics to the islands to help fight COVID-19 and promote health and promises to help the countries in their efforts to combat climate change.