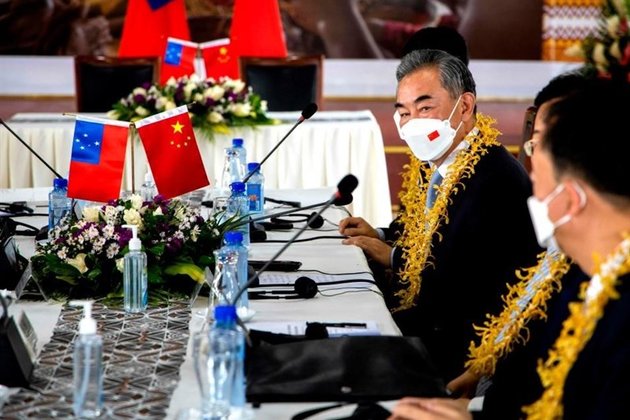 TEHRAN (Tasnim) - Samoa signed a bilateral agreement with China on Saturday, promising "greater collaboration" as Beijing's foreign minister continues a tour of the South Pacific that has sparked concern among Western allies.

The mission has prompted Western leaders to urge regional counterparts to spurn any Chinese attempt to extend its security reach across the region.

A press release from the Samoan government confirmed that Chinese Foreign Minister Wang Yi and Samoan Prime Minister Fiame Naomi Mata'afa had met and discussed "climate change, the pandemic and peace and security".

Local media were invited to witness the signing of a deal, but no questions were taken.

The deal also contained an agreement to help build a police fingerprinting lab in addition to an already announced police academy in the country, which follows earlier commitments of "capacity building" for law enforcement in the Solomon Islands.

The release said that China would continue to provide infrastructural development support to various Samoan sectors and there would be a new framework for future projects "to be determined and mutually agreed".

"Samoa and the People's Republic of China will continue to pursue greater collaboration that will deliver on joint interests and commitments," the release said.

The Chinese delegation has already visited the Solomon Islands and Kiribati this week.

It arrived in Samoa on Friday night before flying on Saturday afternoon into Fiji, where Wang will visit Prime Minister Frank Bainimarama and attend a group meeting of foreign ministers from Pacific countries.

Other stops are expected in Tonga, Vanuatu, Papua New Guinea and East Timor.

In a duel for influence, Australia's new Foreign Minister Penny Wong was in Fiji on Friday, seeking to woo island states after the Solomon Islands took Canberra by surprise last month by signing a wide-ranging security pact with China.

"We have expressed our concerns publicly about the security agreement,". Wong told reporters in the capital of Suva.

"As do other Pacific islands, we think there are consequences. We think that it's important that the security of the region be determined by the region. And historically, that has been the case. And we think that is a good thing."

At the first stop in Honiara on Thursday, Wang lashed out at "smears and attacks" against the security pact already signed with the Solomon Islands.

The wide-ranging draft agreement and a five-year plan circulated to several pacific nations, both obtained by AFP, would give China a larger security footprint in a region seen as crucial to the interests of the United States and its allies.

In a stark letter to fellow Pacific leaders, Federated States of Micronesia President David Panuelo warned the agreement seems "attractive" at first glance but would allow China to "acquire access and control of our region".